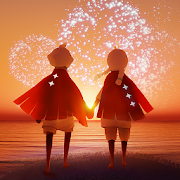 Sky: Children of the Light

Embark into the strange and the unknown in Sky: Children of the Light, a delightful role playing game

Discover an unfolding tale as you get to explore a colorful yet mystical world of Sky: Children of the Light, a role playing game (RPG) on mobile.

The free RPG on mobile is a multiplayer, aesthetic game where players like yourself can team up with friends as well as strangers and solve the mysteries of the universe.

Each player is free to fly at their own speed across the game's 3D environment. On your journey, you'll have the opportunity to exploit your flying abilities to explore the game's vast lands.

You can challenge the whole game as a solo player, but when you team up with a few friends, it’s definitely going to be much more fun. Exploration is important, and since there are a lot of hidden secrets to discover, it will reward those who spend their time discovering every nook and cranny.

Sky: Children of the Light enables you to customize your character in many different ways. When you go exploring seven different worlds, you can do alongside other players, you will be impressed with the visuals and soothing sound.

Solve quests in order to reveal and reunite the family of the seven ancestors who have been tragically separated in the kingdom. Discover these family’s origins and build meaningful and magical friendships with each member.

Uncover hidden treasure and share your riches to friends to show appreciation. Lift your wings to the unknown lands, support the starving kingdom people and lead them to a better path.

Install for FREE and fly high and soar!

Sky: Children of the Light